Be still, and know that I am God!– A Testimony by Teng-Ko Weng (Part 1)

I have two sons. Luke is the younger one. When he was in high school, he often had headaches. Our family doctor recommended taking pills to suppress the pain. Despite taking medication, his headache worsened. Shortly before that, Luke’s best friend had just passed away. And then, another friend moved out of the province. Eventually, he became good friends with another boy in our neighbourhood. Luke shared his stories with this boy, but this boy only made fun of him. Even worse, a few kids from our neighbourhood got together and laughed at Luke. This made Luke very sad and he developed low self-esteem. Because of all these struggles, Luke felt that he was betrayed.

Meanwhile, his headache never stopped. By now, Luke was getting depressed. He took pills constantly. He felt thirsty all the time. Even if he had a lot of water to drink, he still didn’t feel satisfied. Sometimes he felt sick from drinking too much water. He was also hungry all the time. No matter how much he had eaten, he was still hungry. Our family doctor had no clue on how to help Luke. He asked us to visit a psychiatrist. The psychiatrist thought Luke’s illness was caused by anxiety. In order to release the anxiety, Luke continued taking more pills for the next several years. However, his headaches, thirst and hunger remained. He was very hurt mentally and physically. He lost faith towards his doctor and refused to see any other doctors as well. He was suffering so badly he thought of committing suicide.

Luke’s health had not been improved for years. Suddenly, one day, his face was swollen. His head looked like a ball. He was very weak. After taking a few medical tests, Luke was diagnosed with Hypothyroidism. We then booked another appointment with the doctor for further testing. However, Luke had severe headache on April 6, 2013. It was so bad he was rolling on the ground. He lost his eye sight. He kept throwing up. We quickly took him to emergency. After scanning his brain, the doctors discovered a tumour. We were told that Luke had brain cancer. Now we understood that it was the tumour that caused his headaches, hunger and thirst.

I felt so helpless and hopeless. I kneeled down and prayed to the Lord Jesus. I asked his help to save my son. My heart was so heavy that no words could ever describe my feelings. I didn’t know what to do, so I read online. On its webpage, it says “Be still, and know that I am God”. This verse was fairly short, but my heart was filled with peace because of it. I knew the Lord was talking to me through the verse. He told me, “Don’t worry. I know everything. I am in control. I will take care of this.”

The day after that, I received an email from a Christian friend. He told me, “This was what the Lord wants to tell you, ‘Be still, and know that I am God’ ”. How amazing! He had no idea I just read the same verse. I was completely astonished by God’s signs, wonders and miracles.

While in the hospital, Luke received brain surgery, chemotherapy and Radiation therapy. During these treatments, his body suffered seizures and strokes. Both my wife and I were very worried! We sincerely asked God for help. We kept meditating on the verse, “Be still, and know that I am God”. We hoped with all of our heart for the almighty power from the Lord.

When we were in the hospital, the doctors told us, “If Luke doesn’t get better in a few days, we will have to stop giving him further treatments. You and your families need to be prepared.” We were so sad. We were filled with fear. All of us kept praying. We prayed continually. And then, both my wife and I read the same verse on the different pages of , “Be still, and know that I am God.” This verse is from Bible. Psalm 46:10 says, “Be still, and know that I am God; I will be exalted among the nations, I will be exalted in the earth.” God knows how helpless and tired we were. He knows our fears. When we were sad and lost, he comforted us by showing us the same verse again and again. (To be continued) 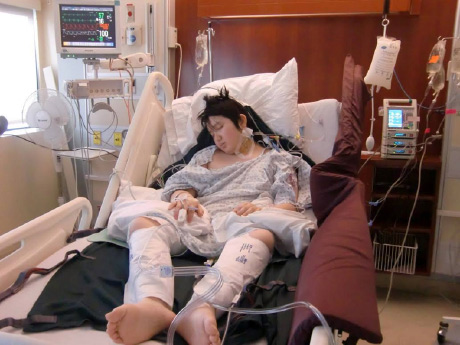